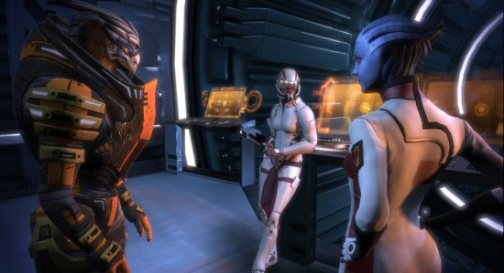 I love writing about film, video games and TV. But, I don’t get paid to write about any of this. For a living I am an Avid editor. Anyways, I fell into a deep love affair with the Mass Effect trilogy this year, playing all three games in a span of three month with a combined nearly 300 hours of gameplay. I know, right.

I was pretty emotionally crippled when I beat the trilogy, not just because of the plot-hole infested ending, but because I was going to miss the experience of playing through the games. They were seriously like no other games I’ve ever played and I personally consider Mass Effect 2 one of the greatest video games I have ever played.

Anyways I stumbled onto this Youtube video that clocks in at 2 hours and 48 minutes. This guy apparently went in and recorded all the cut scenes and hours of gameplay footage to cut together a movie version of the first game. It’s pretty awesome. There are only a few things I’d change, it could definitely be cut down  shorter and some of the transitions could be perfected, but there’s only so much you can do with an already completed mixdown of audio.

It be nice if Music faded up in scenes, but the music can be completely random and inappropriate to what we saw before. There’s know way to separate the music from the dialogue so you can’t do much there. Regardless, what this Youtube user has done here is astounding and a lot of hard-work. It has too few views so I wanted to try and get the word out about it. Maybe then we will see one of the other two games.

Full Video after the cut: