SideNote: Best Christmas Movie of All Time – It’s a Wonderful Life vs. A Christmas Story 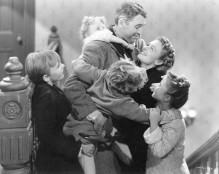 SideNote: Best Christmas Movie of All Time – “It’s a Wonderful Life” vs. “A Christmas Story”

What a perfect film. Frank Capra absoultely nailed the sentimental “It’s a Wonderful Life,” and it’s great to see so many people praise this film despite the anti-sentimentality spirit that has been going on in the film world.

The movie is older, and it is longer than many Christmas films, but it has a strong moral center, and tackles the subject of winter-time depression in a creative way that has gone on to inspire many television episodes, books, and other works of art. It’s good for all ages, and a reminder that Jimmy Stuart was, and probably still is, the most likable actor in the history of cinema.

You probably won’t hear about “A Christmas Story” being inducted into the National Film Registry any time soon. It’s a crowd-pleasing family film that will have the whole family laughing from beginning to end. Multiple television stations run this film, many times on repeat around the Holiday season. Many Christmas family comedies have tried (but failed) to emulate the way the film parodies the quirks of the Holiday.

It’s not quite as old as “It’s a Wonderful Life,” but it is classic family entertainment made for and about Christmas.

“A Christmas Story” is probably the better film to watch around the Holidays (if you haven’t already seen it a hundred times). It is more directly about Christmas and more engaging to children (considering that the main protagonist is a child).

You should really try and watch both though! “It’s a Wonderful Life” is probably the only Christmas film that you will find on many “Best Films of all time (in general) lists across the internet. Because it really is one of the greatest films of all time. I can’t exactly say the same for “A Christmas Story,” which is absolutely perfect for the Holiday, but doesn’t really stand with the other all-time classics.