Preview: The Potential of “Unbroken”

Preview: The Potential of “Unbroken”

“Unbroken” is one of the few 2014 films that hasn’t been seen by any eyes yet. However, it is a film that has had everyone’s attention since it was announced.

“Unbroken” is an adaptation of the non-fiction book titled “Unbroken: A World War II Story of Survival, Resilence, and Redemption,” a title that may have been a tad too long for its feature adaptation. This biography was written by Laura Hillenbrand who retells the story of Louis Zamperini, a former Olympic track star who survived a plane crash, spent 47 days drifting on a raft, and then survived two and a half years as a prisoner of war in several brutal Japanese internment camps.

Wow. Everything about that sounds like an incredible story. Universal Pictures purchased the rights to the book in January 2011, having already acquired the movie rights to Zamperini’s life towards the end of the 1950s. William Nicholson and Richard LaGravenese wrote early drafts for the film, but when Angelina Jolie replaced Francis Lawrence as director, Joel and Ethan Coen rewrote the script.

Angelina Jolie’s first feature film “In the Land of Blood and Honey” received modest reviews, so it’s easy to see that she has the talent to make a good movie.

What’s more impressive than Jolie’s credit is the above-the-line crew. Roger Deakins will no doubt turn this film into a major contender for the cinematography Oscar, having been nominated 11 times without a win. The score is being done by composer Alexandre Desplat who also has never won an Oscar despite having six nominations in the last seven years. Desplat is also a man who never sleeps, having done the score for the 2014 films: “The Imitation Game,” “The Grand Budapest Hotel,” and “Godzilla” as well as “Unbroken.” 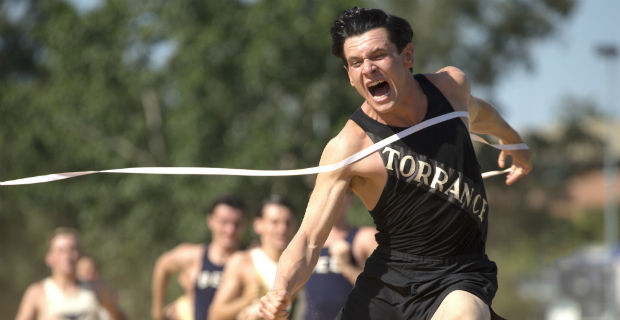 So on paper, what could go wrong? Despite Zamperini having an extraordinary life, “Unbroken” still has the potential to fall to the typical biopic conventions. Could it be more like “A Beautiful Mind,” or more like last year’s “Hyde Park on Hudson.” It is also a war movie, which accompanied with cinematography by Deakins, could capture it in the bombastic scope that it deserves.

The actors are all well-qualified, even though none of them are major names. Jack O’Connell plays Zamperini, which will no doubt be a major star-making role for the young performer. The one, and only thing, that is concerning is whether or not these depictions of war and cheating death will be sugarcoated. The film received a PG-13 rating, which may not be quite high enough to truly depict the struggles of Zamperini.

Louis Zamperini passed away earlier this year on July 2nd. He was a representation of perseverance, who leaves behind a very inspirational story. Whether you hear about it from the internet, the book, or the movie; it is a story that should, and will be told for a long time.

-An unbelievable real-life story. The story of Louis Zamperini is impressive to say the least, and a movie adaptation was inevitable. This alone gives the film a strong base right out the gate.

-The cast. A bunch of young actors who are relatively unknown, but have proven that they have the talent to perform. From Jack O’Connell in the lead role to Domhnall Gleeson, Garrett Hedlund, and Miyavi and the supporting roles.

-Angelina Jolie. Some may say she is a con based on having only one other feature credit under her belt that received mixed reviews. But if we learned anything from “In the Land of Blood and Honey” it’s that she can do it. The first pro-bulletin will only help her.

-Roger Deakins, Alexandre Desplat, and the rest of the above-the-line crew.

-Joel and Ethan Coen revising the script. They are known as two of the best directors of the modern-era, but you could also say the same for their screenwriting. Modifying what two other talented writers had already written, should only enhance the strength of the script.

-Subject to biopic conventions. When biopic’s succeed, they can really succeed. Just take a look at this year’s “The Imitation Game.” However, when they fail, the can really fail.

– Lack of grit in Trailers. You usually can’t trust a trailer that much, but if the final film matches the mood of the past trailers, then you can expect something potentially heavy-handed.

-PG-13 Rating. This has to be the biggest con of them all. Some would argue it shouldn’t matter, but it’s hard to picture a war movie about suffering in a POW camp as “PG-13.” No doubt the lesson to be learned from this film is “never give up,” but in this situation maybe lightening it up will only lessen the impact.