After his father’s death, Orson Welles traveled to Europe using a small inheritance. He made his stage debut at the Gate Theatre in Dublin, in 1931. Above all, he was a performer.

While working extensively in theatre, Welles worked in radio. “Radio is what I love most of all. The wonderful excitement of what could happen in live radio, when everything that could go wrong did go wrong.” It was with this perilous attitude that Orson Welles would dive into his first film project.

CBS Radio invited Orson Welles to create a summer show for 13 weeks, the series began in 1938 initially titled “First Person Singular.” Later renamed “The Mercury Theatre on the Air,” the radio show featured reenactments where Welles and others would perform roles.

The Mercury Theatre’s adaptation of “The War of the Worlds” by H.G. Wells on October 30, 1938 brought Orson Welles instant fame. The story was performed as news bulletins, this confused a lot of viewers tuning in. People tuning in late believed the fictional news reports of the alien invasion to be real which caused widespread panic and rumored to have caused even deaths in the form of heart attacks and suicide.

After this infamous performance, Welles began receiving several Hollywood offers, which he resisted at first. 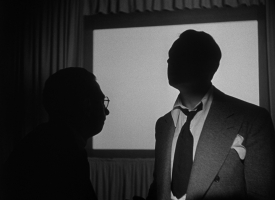 RKO Radio Pictures president George Schaefer eventually offered Welles, what is considered to be, the greatest contract ever offered to an untried director: complete artistic control.

Welles first idea was to adapt Joseph Conrad’s “Heart of Darkness.” When a budget was drawn up RKO declined approval. They also declined his second offer “The Smiler With the Knight” based on the Cecil Day-Lewis novel.

The third offer was “Citizen Kane,” an idea Welles conceived with screenwriter Herman J. Mankiewicz. It was originally titled “The American.” Mankiewicz’s original outline was an expose on the life of newspaper conglomerate William Randolph Hearst, whom he knew socially and came to hate, having once been great friends with Hearst’s mistress, Marion Davies.

Mankiewicz was a notorious gossip and drunk. He exacted revenge with his unflattering depiction of Davies. Speaking with Peter Bogdanovich in February 1969, Orson Welles said “Nobody was more miserable, more bitter, and funnier than Mank… a perfect monument of self-destruction. But, you know, when the bitterness wasn’t focused straight at you, he was the best company in the world.”

Filming took place between June 19, 1940 and October 23, 1940 in what is now Stage 19 on the Paramount lot in Hollywood. Welles prevented studio executives of RKO from visiting the set. He knew they were expecting him to do an exciting film that would bring the same hype that his “War of the Worlds” broadcast did. The film exceeded the estimated budget of $723,000 by over $100,000.

After a rough cut was viewed by the press, Friday magazine ran an article drawing point-by-point comparisons between Kane and Hearst and documented how Welles had led on Louella Parsons, Hollywood correspondent for Hearst’s papers, and made a fool of her in public. She demanded an immediate preview of the film. James G. Stewart, who was present at the screening, said that she walked out of the film. Parsons later threatened RKO with a lawsuit.

Hearing about the film enraged Hearst so much that he banned any advertising, reviewing, or mentioning of it in his papers, and had his journalists libel Welles. The head of MGM, Louis B. Mayer, acting on behalf of the whole film industry at the time, made an offer to RKO Pictures of $805,000 to destroy all prints of the film and burn the negative. RKO, thankfully, rejected the offer.

The documentary “The Battle Over Citizen Kane” lays the blame for “Citizen Kane’s” relative failure squarely at the feet of Hearst. The film did decent at the box office and went on to be the sixth highest grossing film in its year of release. However, the film’s commercial performance fell short of it’s creator’s expectations.

Hearst’s efforts to suppress the film backfired in the long run. “Citizen Kane” was nominated for 9 Oscars, and despite not receiving the top honor of “Best Picture of the Year,” it is now widely considered not one of, but the greatest film of all time.

Welles would continue to work in film, but never to the same degree of success. He was a performer, and in an accidental turn of events, popularized by a controversial radio broadcast. He took advantage of the amazing opportunity RKO Pictures presented him, and took a major risk on an original story paralleling the life of a very powerful man.

He created one of the greatest films of all time.