Preview: The Potential of “The Theory of Everything”

Preview: The Potential of “The Theory of Everything”

Anthony McCarten isn’t a household name, but for the last 20 year he has been a very busy writer. Since 1990, he has written 7 novels, his first novel “Spinners” was voted one of the top ten novels of 2000 by Esquire magazine. He has wrote for 8 films, a few of which have been direct adaptations of his novels, some for television, and some shorts. He is written 12 plays and 1 musical. As far as films come, “The Theory of Everything” will be the most popular titled that he has worked on.

He began writing the script back in 2004. The film was to be an examination of Professor Stephen Hawking’s relationship with his now ex-wife Jane from 1963 when he was diagnosed with motor neurone disease to his success in physics. Jane Wilde’s memoir, “Travelling to Infinity: My Life with Stephen” served as inspiration for the film. 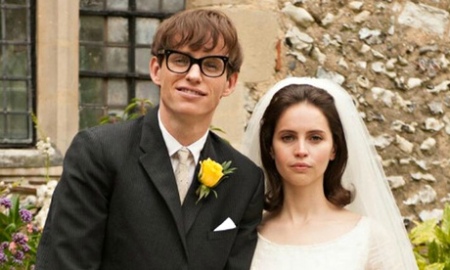 In 2012 James Marsh was set to direct the film. Working Title Films and Producers Eric Fellner and Tim Bevan agreed to produce the film alongside Universal Pictures in 2013. Filming began in Cambridge in September 2013.

Who is James Marsh? Well, that’s Oscar-winner James Marsh to you. He had previously directed the Oscar-winning documentary “Man on Wire” in 2008. Another familiar documentary he directed was “Project Nim” in 2011. He has worked on a few non-documentary films, including 2012 drama “Shadow Dancer” which received mixed reviews.

On the outside, it seems like this could be one of those biopics that disappears among the crowd. But after the release of the trailer it looks like this film could easily be good, and easily be – just alright. Both Eddie Redmayne and Felicity Jones look great in the trailer though.

The film is scheduled to be screened in the Special Presentations section of the 2014 Toronto International Film Festival. The release date is November 7, 2014 right next door to Oscar season.

– The story is interesting. It could easily be painted too cheesy or too sweet, but knowing that their relationship doesn’t work out in real life shows the potential for some serious dramatic arc.

– James Marsh may be in possession of a golden Oscar statue, but it was for a documentary, and his resume regarding narrative films hasn’t been very weak.

– The experience of the above-the-line crew isn’t exactly there. McCarten has been writing for a long time, but he hasn’t had any major success in film.

– There is a biopic curse. Biopics can be tricky, especially when the subject character is still alive. “The Social Network” is an example of how to approach it. Something like last years “Hyde Park on Hudson” isn’t.

– May not be an Oscar film. Hopefully this film is good, but outside of Redmayne and Jones I doubt this film will show up anywhere. There’s always a chance we will hear the applause from outside of Toronto, so we can hope for the best.