Film Gallery: One Flew Over the Cuckoo’s Nest

Film Gallery: One Flew Over the Cuckoo’s Nest

“One Flew Over the Cuckoo’s Nest”  is a 1975 film directed by Miloš Forman, based on the 1962 novel “One Flew Over the Cuckoo’s Nest” by Ken Kesey. It was the second of three films to ever complete the Oscar grand slam (when a film wins an Oscar in Picture, Director, Actor, Actress, and Screenplay – The other two were “It Happened One Night” and “The Silence of the Lambs”).

The story follows Randle Patrick “Mac” McMurphy, played by Jack Nicholson, a criminal serving a short-term sentence for statutory rape of a 15-year old girl, as he is transferred temporarily to a mental institution for evaluation.

The story unfolds primarily in the mental hospital. The film was shot at the Oregon State Hospital in Salem, Oregon, which was also the setting for the novel.

McMurphy is anti-authority, especially in regards to the stern, unyielding Nurse Mildred Ratched (played by Louise Fletcher). McMurphy establishes himself the leader of the mental patients when he concludes that Ratched’s methods aren’t preparing the patients for the outside world, but rather instilling fear into them and making matters worse.

For the duration of “One Flew Over the Cuckoo’s Nest” there is a battle of personalities, primarily between our protagonist – McMurphy and our antagonist – Ratched. Through his antics, McMurphy helps reveal to the audience the troubled characteristics of the supporting cast  including Billy Bibbitt (Brad Dourif) a nervous man with a stutter and “Chief” Bromden (Will Sampson) a silent American Indian imposing to be deaf or mute.

Legendary film critic Roger Ebert said “Miloš Forman’s “One Flew Over the Cuckoo’s Nest” is a film so good in so many of its parts that there’s a temptation to forgive it when it goes wrong. But it does go wrong, insisting on making larger points than its story really should carry, so that at the end, the human qualities of the characters get lost in the significance of it all. And yet there are those moments of brilliance.” He would later give the film a perfect four star rating and put it on his “Great Movies” list.

The film is #33 on the American Film Institute’s 100 Years… 100 Movies list. In 1993 the film was deemed “culturally, historically, or aesthetically significant” by the United States Library of Congress and selected for preservation in their National Film Registry.

Ken Kesey, author of the book, participated in the early stages of development, but withdrew after creative differences with the producers over casting and narrative point of view. Later on he filed a lawsuit against production and won a settlement. Kensey claimed that he had never seen the movie, but said that he dislike what he knew of it. Later Kensey claimed to have been channel surfing when he stumbled upon a movie he might like, after a few minutes he recognized the movie and quickly changed the station.

Kensey’s book was published by Viking Press and Signet books in 1962, but had been written three years prior in 1959, amidst the Civil Rights Movement. Changes were being implemented in the way America approached psychiatry and psychology. Not only was the novel meant to act as a study of the human mind, but it was also a critique to the inhumane approaches and a celebration of humanistic principles. Time Magazine listed the novel in its “100 Best English-Language Novels from 1923 to 2005” list.

Kensey based the novel on graveyard shifts he worked as an orderly at a mental health facility in Menlo Park, California. He took psychoactive drugs, including Mescaline and LSD as park of Project MKUltra and advocated for drug use as an individual path to freedom. The novel itself stirred up a lot of controversy in schools being banned in several districts. Five residents of Strongsville, Ohio sued the local Board of Education in 1974 and deemed the book “pornographic” and that it “glorifies criminal activity, bizarre violence, and torture, dismemberment, death, and human elimination.” A teacher was also fired for assigning the book in 1978 from St. Anthony, Idaho Freemont High School, and the book has been challenged/banned at several other schools since. 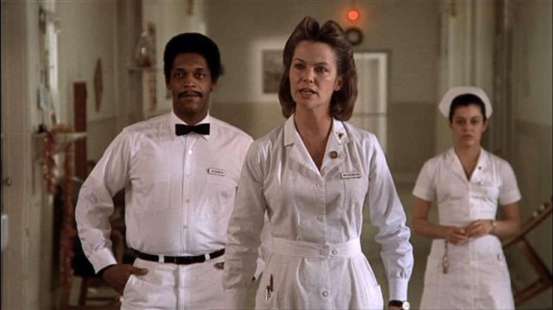 The title of the book/movie comes from a nursery rhyme:

The poem reflects a level of absurdity in the fact that a joined “flock” of geese cannot fly in separate directions at once. Also the fact that the cuckoo bird doesn’t build a nest of its own.

Kirk Douglas  purchased the film rights after he starred as McMurphy in a 1963 Broadway play based on the book. The play also starred William Daniels, Gene Wilder, and Ed Ames. The play itself received mixed to negative reviews. Douglas bought the rights with the intention of starring in the movie himself, but every major movie studio kept turning the project down. When the film was to finally be produced, Douglas realized that he was past the age for the part.

Douglas met with Miloš Forman in Prague and thought he’d be the ideal director for the movie. He would eventually sign over the rights to his son Michael Douglas who jointly produced the film with Kirk and Saul Zaentz. The screenplay was originally written by Kensey, but Forman and Kensey had a falling out, and Lawrence Hauben and Bo Goldman were brought in. 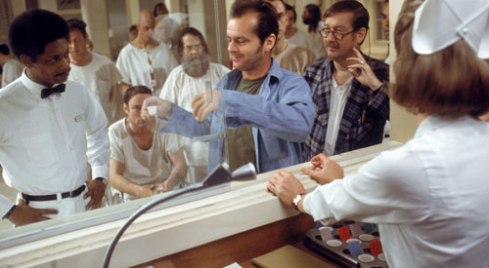 A film’s journey is a great one. “One Flew Over the Cuckoo’s Nest” took 16 years to travel to the big screen. Even with the loss of collaboration with the book’s author, the difficulties in financing and development, a film finally came to be. That film is now widely regarded as one of the best of all time.