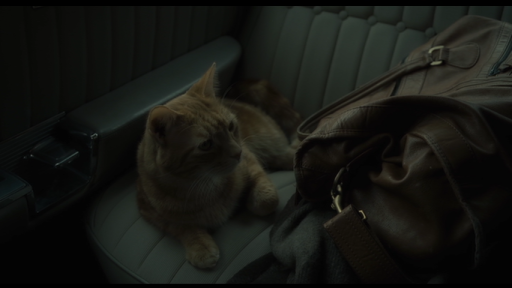 Joel and Ethan Coen’s “Inside Llewyn Davis” was an ambiguously mysterious movie. Considering it’s lack of attention, it was perhaps to in depth for its own good. In the beginning of the film it is revealed that Llewyn got an old friend, Jean (Carey Mulligan), pregnant. He finds the money to get her an abortion when it is revealed at the clinic that a previous ex-girlfriends abortion didn’t take two years ago.

So Llewyn is a father, he looks up his ex-lover to discover where she lives in Akron. On his journey back from Chicago after a failed audition, he notices the exit, but passes it, then almost immediately running into what seems to be an orange cat, resembling the cat that has been with him the majority of the film.

Considering “Inside Llewyn Davis” is a character piece that figuratively goes inside Llewyn Davis, we learn a lot about this narcissistic man. Living unconventionally from couch to couch, missing that exit was a pivotal chance to possibly change his life for the better and get to know his infant son, but he passes up that chance. Some have said that Llewyn was the cat, and if that’s the case it makes the scene all the more poignant that he would have hit the cat with the car after missing the exit.

Accompanied by Bruno Delbonnel’s Oscar-nominated cinematography, the scene is surreal in the best of ways and it puts the morality fable into perspective. 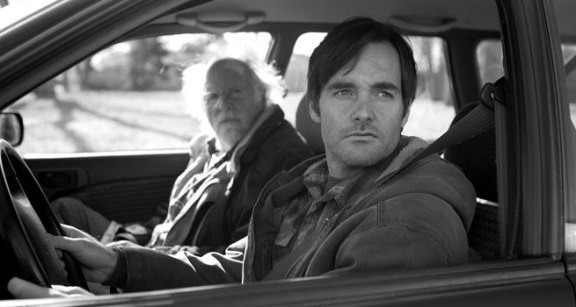 David Grant (Will Forte) reaches his boiling point while dealing with his father’s quest for one million dollars in the climax of the film. What is he doing? Why is he humoring him? Questions that Woody Grant’s (Bruce Dern) wife Kate (June Squibb) and other son Ross (Bob Odenkirk) have been questioning.

When Woody is embarrassed and laughed at by everyone in the town regarding his “million dollar ticket” you feel for the old man despite his flaws. In Woody’s hometown David learns a lot about his father’s history. Much like David, Woody has been taken advantage of most of his life, and this becomes apparent to David.

It always feels like Woody has a form of Alzheimer’s, and he may have, but more eloquently as David puts it “He just believes what people tell him.” David discovers that Woody wanted the money to give to his sons and to buy himself a truck. Feeling sympathetic toward his father, David trades in his car for a new truck and allows Woody to drive it through his home town. Pleasantly surprising the town-folk who have always wanted the best for him and unpleasantly surprising those who stepped on him. It is a charming scene that puts the entire film’s happenings in perspective.

“Let It Go” has some serious competition in the Original Song category at the Oscars. It is still a strong (if not the strongest) contender in the category as it highlights the rising action of the sisterly story. It’s also just a damn good song.

A part from being a good song, the scene provides some impressive animation as Elsa constructs her ice castle. It’s a character defining moment for her as she unleashes the powers that she has with-held her whole life. It could also be a considered a metaphor for running away from responsibility and maturity. A beautiful moments in a charming film.

Another strong musical moment in film this year. Jennifer Lawrence’s passionate rendition of “Live and Let Die” demonstrates why she is one of the greatest working actresses in Hollywood right now, even at the young age of 23.

Rosalyn (Jennifer Lawrence) stays outside the core conflict most of the film, until she asserts herself right into the thick of it. “American Hustle” is a high-energy film which provided a large canvas with a lot paint for the four main actors. This scene with Rosalyn was a energy shot and it was wildly entertaining.

“Gravity” is a very fast-paced film that rarely stops moving, but the film’s best moments happened when it slowed down. Amidst all of the dazzling visuals Alfonso and Jonas Cuaron interlaced traces of character depth.

“Everyone dies, but I’m going to die today,” Ryan (Sandra Bullock) mutters as she falls into a delirium. As she accepts defeat she embraces the final moments of life and intercepts a message from Earth. Unfortunately she can’t understand it, it is a person and their baby. She talks anyways, she laughs, she cries. It is a very poignant moment accompanied by the best performance Bullock has ever given.

The moment following where Matt (George Clooney) appears to her in a vision to, in essence, tell her not to give up was also a contender for the list.

There is a specific scene in “Dallas Buyers Club” where Rayon (Jared Leto) goes to find her father to let him know that she is dying from the AIDS virus. This scene alone may earn Leto the gold statue on Oscar night.

Up to this point, we haven’t seen Rayon outside of her transvestite make-up. From context clues we learn that Rayon’s father doesn’t approve of her lifestyle. So a very skinny Rayon pours her heart out to her reluctant father informing him that she doesn’t have much time left to live. Her father, stern on the outside, is noticeably phased by the news.

Matthew McConaughey is transparent in this film, but Jared Leto steals the film’s greatest moment. It gives us a look into the hardships that the homosexual community faced in that era when they were plagued, not only by the AIDS virus, but by the shame of society.

This scene in Spike Jonze’s “Her” demonstrates strong character development, strong editing, pacing, and all around great film-making. It is revealed early on that Theodore (Joaquin Phoenix) has been putting off signing his divorce papers, it becomes apparent to us as an audience that he still has feelings for his ex-wife.

The scene doesn’t use music to manipulate the audiences emotion, but remains quiet. Just the ambient noise around them. Visually we see glimpses of flashbacks of the broken couple happy together. Taking us into Theodore’s emotional struggles, the scene can be heart-breaking and familiar.

It’s hard to imagine “Captain Phillips” being nearly as successful without Tom Hanks. This particular scene showcases some of the greatest acting ever from Hanks, and we all know that’s saying something.

Richard Phillips (Tom Hanks) remains strong throughout the entire kidnapping, but once the three pirates in the submarine with him are shot, including the younger, more friendly pirate; Richard, covered in blood falls into a deep state of shock. He is taken to an uncomfortably bright medical chamber where he is examined in a medical lab.

“That’s not my blood!” Richard screams as he struggles to speak and answer the doctor’s questions. It is a haunting scene, and a reminder that this film was based on true events that reveals a more realistic side of human trauma above all. Something other thrillers can learn from.

“The Wolf of Wall Street” has stirred up a lot of controversy since its release. Jordan Belfort (Leonardo DiCaprio) and his number-one partner Donnie (Jonah Hill) are high in the majority of the film, but it this pivotal moment it may have been better to have been sober.

Belfort discovers that Donnie is at his house on the phone with Swiss banker Jean Saurel (Jean Dujardin) and that he could potentially say something that he shouldn’t say. All while Belfort’s high kicks in at a country club. After a humorous struggle, Belfort makes it home and immediately tries to stop Donnie.

It is a very funny scene where Jordan and Donnie’s motor skills are shot. Unfortunately, while the audience is laughing, the film cuts to a shot of Belfort’s innocent daughter watching the chaos with discomfort. Then Donnie starts choking. This scene takes the audience on an emotional roller coaster making them question their laughter. Meanwhile Belfort takes inspiration from Popeye, on a nearby television, and takes more drugs as motivation to stop Donnie from choking to death.

It is a shocking scene, and the scene alone is a strong, valid argument to those who claim that the film glorified this behavior.

Steve McQueen’s “12 Years a Slave” set out to do much more than just shock the audience, but it wanted to tell a story about survival in the worst of circumstances. There were a lot of artistic editing techniques in the film to convey passage of time (It can’t be easy to tell a twelve year story in two hours). In one single shot we see the day go by as Solomon is detained to by hanged only to have his executors scared off.

He remains tied up with the noose around his neck and his toes barely touching the ground. Still in the same shot, we see the empty plantation grow crowded with other working slaves who pay no attention to Solomon. They can’t, they fear for their own lives.

This scene leaves us with a shocking image branded in our head. The one scene also convey the entire point of the film which was helplessness. From then on Solomon had a better sense of the constant danger that he was in. He fought for his survival, for the loving family that awaited him. This scene showed us everything.