Video Game Analysis: The Last of Us vs. Grand Theft Auto V

Video Game Analysis: “The Last of Us” vs. “Grand Theft Auto V”

2013 may be one of the most pivotal years in video game history, not only because we have yet again upgraded our consoles to the next generation, but because among the final games of this generation two stood out as potential classics.

It is the golden time of year for movies. All the great films wait to come out at the very end of the year in order to stay fresh in the mind of award-voters. The Oscars is the most presigous award ceremony in the film world, but what about video games? If movies have Oscars, music has Grammys, and television has Emmys what do video games have? Spike TV awards? The VGAs which are broadcasted virtually nowhere. So almost every video game publication (IGN, Game Informer, etc.) has created their own video game awards.

So what title will appear next to the phrase “Best Video Game of 2013” the most? “The Last of Us” and “Grand Theft Auto V” are undoubtedly the front-runners, but which video game really deserves it? Let’s make a case for both of them. 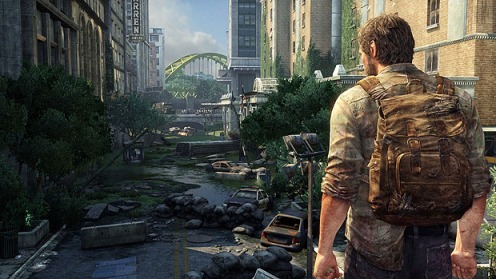 “The Last of Us” cements the video game medium’s ability to tell gripping and emotional stories. Yes, a good storyline in a video game isn’t anything new, but look how popular high-quality narratives have become in video games.

In the past, video game awards usually go to the games that were able to make the player the most addicted. Don’t get me wrong, what “Halo 2” and “Call of Duty: Modern Warfare” were able to do with multiplayer gameplay is astonishing, even if they have felt compelled to scotch tape a story “campaign” to each installment.

So no you won’t be playing a story-driven video game over-and-over again, just because a video game is addictive, doesn’t mean it is good. Some of the greatest films aren’t films you would watch repeatedly. They aren’t great because they have great replay value, they are great because of their lasting effect. A good story can inspire, it can motivate, and it can move you.

“The Last of Us” is the substance, whereas “Grand Theft Auto V” is the style. People may be playing “Grand Theft Auto V” for the next year-or-so, but nothing about its story or multiplayer will move or motivate an audience. It’ll simply keep them entertained for a long period of time while they procrastinate real-life away until they get bored of it and fallback on another strung out “Modern Warfare” sequel.

The dawn of the Xbox One and PlayStation 3 has fallen upon the gaming community, ending the longest running console generation yet. It’s amazing the level of graphic quality the 360 and PS3 have been able to deliver us this year as compared to when it first released, but now it’s over. It is time to upgrade and move on.

Ending the longest running generation is “Grand Theft Auto V” a game that has arguably better graphics than any game release on the PS4 and Xbox One so far. Rockstar has turned their successful sandbox franchise into a borderline MMO, taking place in a world so massive and so technically perfect; pushing the consoles to their absolute limit. The result is gorgeous, it is addicting, it is endless fun.

MMO’s haven’t ever been popular in console gaming, because technology hasn’t been able to really pull it off. We’ve had multiplayer games that have got close, but have a few catches they don’t mention on the game case. “Grand Theft Auto V” is an online MMO, like the very successful “World of Warcraft,” except taking place in the world of Los Santos.

When you think graphics, when you think about all the artistic and analytical choices that go into making every small detail count. “Grand Theft Auto V” stands out on top. At this moment in time it is the highest technological achievement in video games, and a solid preview for the amazing games we’ll see in the near future.

When it comes to labeling “the best of the year” in film, there is a often a predicament where it comes down to style or substance. Most would root for the substance, the route most film awards have often taken. But what if the style is groundbreaking? Many argue that “Titanic” had a weak story, that it wasn’t that great. It didn’t win the Oscar for its story, it won because it was groundbreaking, with visual effects that look better than most films today.

So style or substance? Technical achievement or moving story? The argument could go all the way back to the goal of the medium. When “Pong” was being developed the goal wasn’t to tell a good story. Allan Alcorn probably wasn’t even thinking of that possibility. With minimal technology, the goal was replay value.

Achieving goals is a theme in every existing video game. Get from point A to point B, even in story-based video games. The only medium that lets the audience drive the bus, and now with some games, make the big decisions. Video games have narratives now, all of them, some significantly better than others. They have scripts, voice-actors, 3-act structures, character archs. And of course in many games you can wonder off and explore or do small side quests, but in the end if you want to achieve the goal of “beating the game” you have to go through the story, and often it is a storyline that can compete with the best of television shows and movies.

“Grand Theft Auto V” has a storyline, but it also has a multiplayer. People keep coming back for the multiplayer which offers side-quests and money-making goals where the gamer will do several different things over-and-over again to achieve them. It’s not bad, but in the years to come it won’t be the story that people will be talking about when “Grand Theft Auto V” is brought up.

Making the audience become addicted with repetitive goals isn’t anything new, just look at “Pac-Man.” Still, this is what the medium strived for in the beginning, this format is rooted in video game history.The story-based game is relatively new and still growing with the medium. The reason “The Legend of Zelda: Ocarina of Time” was so big was because of its revolutionary storytelling format. At that time, no one had seen anything like it. There was a certain level of emotional investment never before achieved with video games. Since then there have been many games with even stronger storylines.

It comes down to revolutionary video game storytelling vs. revolutionary video game graphics/replay value. Style vs. Substance. The “game of the year” awards will be scattered this year. Unfortunately for us there is no set video game awards group that is prestigous enough for us to try and predict the outcome. But if there was I would stick with the status quo and say “Grand Theft Auto V” would win it, despite my personal beliefs.

Film, television, music, all mediums are evolving in different ways, but video games are still in their early stages, Video games often want to do more than just entertain the audience, it wants to turn them into addicts. At this point, it really feels like video games don’t know what kind of medium they want to be. But it’s still early, and I’m happy to watch this medium evolve into something greater as each year goes by.