Film Review: Seeking a Friend at the End of the World 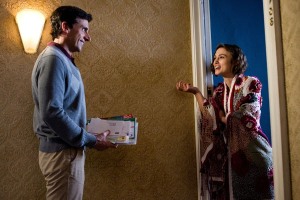 Film Review: Seeking a Friend at the End of the World
by Matthew Durham

Writer/Director Lorene Sacfaria, fresh of her success with Nick and Norah’s Infinite Playlist presents us with a flawed, but engaging drama. Seeking a Friend at the End of the World is the kind of movie that wants to call itself a dramedy, but fails to present any effective comedic elements.

If you go in to the movie with the expectations the trailer and ads provided you with, you might be disappointed. But if you come in to the theater with a blank slate of expectation, expect a gratifying romantic tragedy.

Steve Carell plays a man whose wife runs out on him during the announcement of armageddon. He is on his own with a few friends left, but those friends need to be with their loved ones. Soon he meets his neighbor, a younger woman played by Keira Knightley who longs to see her parents before the end of the world. During a riot Knightley agrees to help Carell as long as he can get her on a plane to see her parents.

The movie is predictable, but emotionally sound up till the inevitable tragic ending. Do you ever care about these characters? I did, not as much as I could have, but I did. More of the drama of the film comes from after the credits roll.

As far as comedy they do try and conduct a certain amount of chaos around our protagonists that’s worth the few jokes they achieve. The atmosphere is believable and people are openly doing heroine and having sex. While a lot of this can be funny, it’s also kind of sad. The depiction of the end of the world is very realistic.

All in all, Seeking a Friend at the End of the World works very well as a tragedy and is weak as a comedy. It is great as a movie. I had similar feelings toward Nick and Norah’s Infinite Playlist where the film was great, but mis-advertised and the jokes that are told, are not really funny.

The best part is Carell and Knightley who deliver. Especially Knightley in a scene where she talks to her parents over a satellite phone.

One thought on “Film Review: Seeking a Friend at the End of the World”