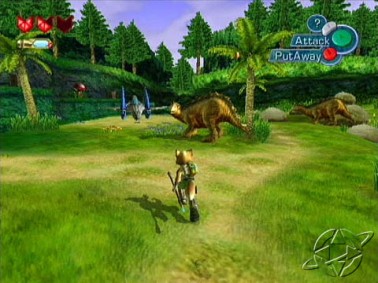 I loved my Gamecube, during that time though having the PlayStation 2 or the Xbox was more favorable. But seriously looking back I don’t understand why. The GameCube had one of the greatest game selections of any console ever. Granted Nintendo produced original games for its consoles much more often than Microsoft or Sony.

So not to long ago I dug up Star Fox Adventures a sequel to the smash hit Nintendo 64 game Star Fox. I have gone back and played this game three times now, and I’m holding into to it tightly for the future. Out of all the great memorable GameCube games it’s kind of odd I am choosing to do a nostalgia piece on Star Fox Adventures right?

At the time I would probably say I was the only one of my friends who admired the game at all. Most people were disappointed that Fox McCloud took to the battle on foot considering the original Star Fox primarily took place in his Starcraft.

I would agree that this was an odd choice for fans of the original by Nintendo, but once you swallowed your pride and actually tried the damn game it was a pretty fun platformer with a surprisingly deep and heartfelt storyline. Another claim that is often made is that Star Fox Adventures was trying to hard to be like the Legend of Zelda games and to those claims I say: What the hell is wrong with that?

If you are going to develop a game with a strong storyline what better inspiration to have than any of The Legend of Zelda games. In Star Fox Adventures you are in space, and without spoiling to much the final boss fight is also in space. But the platforming and puzzle-solving are what takes center stage. You must use your resources to try and solve puzzles or missions that take you further into the story.

Rareware developed the game with Nintendo, this pairing was seen once before in one of my favorite Nintendo 64 games Donkey Kong 64 and a lot shows in the puzzles and problem solving you have to complete. But don’t worry, it’s not all tedious puzzles (which don’t ever get too tedious), there are epic boss battles, and fights and the playability never gets to difficult or complex.

Bottom line: I loved this game, I loved the story, I loved the character development of characters we only knew a little about from the first game. I especially loved the atmosphere of adventure with the design and the phenomenal score.  And to fans of the original Star Fox I would suggest trying it, it won’t be the same is your game but it will still be a very fun time.