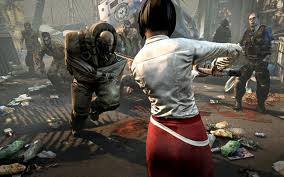 Bored on a day off, got a call from a friend to buy this $20 XBOX 360 game called Dead Island. I trust his opinion and the game was real cheap and better late than never I discovered the arousing addiction of an online Zombie RPG. During the first Chapter of the Prologue the game was really scary, I can’t usually get into frightening games too easily, but once I got into the main game and had the help of my friends online it was nothing but wild entertainment.

Just like most RPGs in Dead Island you can explore a whole world, well and island and scrounge up whatever you can, you can also trade, grow to a higher level, do main missions, side missions all the basic RPG elements are presented here. What makes Dead Island brilliant is its originality, It’s almost literally Skyrim meets Left 4 Dead.

As I progressed through the cliched storyline, I played with my friends most of the time, but when I wasn’t I played with random people who didn’t always want to do what I was doing. I was often booted from games for taking too long upgrading my character or weapons.

The games graphics were deeply flawed, but forgivable considering the game comes from a not-so-popular developer. My hopes are that after the success of this game we will experience better graphics and playability in the anticipated sequel Dead Island RipTide.

This game can be pretty realistic, you can’t just hack and slash you’re way to the finish line. Each zombie encounter takes combined elements of strategy and hand-eye coordination to defeat, especially the special zombies which can be intimidating when encountered.

Overall, the game is scary, addicting and entertaining. Is the fun limited? Sure. But for the price it is at now it’s worth it by far. I can safely say I can’t wait to play through the sequel with my friends and I am hoping that all the minor flaws of this game are repaired.