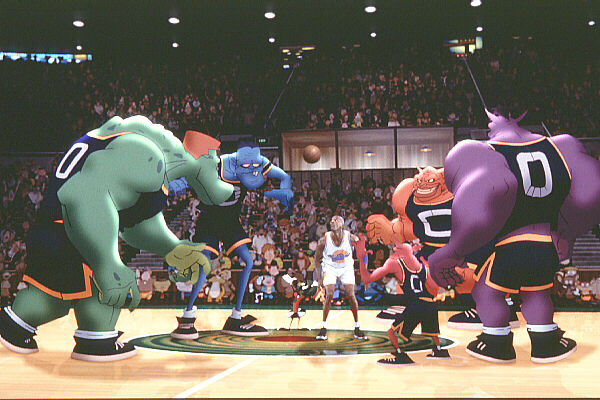 What is it about Space Jam that keeps us talking about the movie even now 18 years after its release? It was by no means an award-winning movie. It was a particularly terrible movie either. Analytically I see it as a nostalgic reminder of a more simple time before the world became digitalized.

Alright, that might be a little bit of a dramatic way to put it. Space Jam is Space Jam and for better and for worse in its time it was a very fun and silly movie. I was four years old when this movie was released, I would tell you I saw it in theaters but I don’t know whether I did or not.

Having a 90s childhood I was acquainted with The Looney Tunes but I didn’t know them extensively. Despite popular belief the older cartoons like Looney Tunes, Tom and Jerry, Flintstones, Yogi Bear all occasionally aired on television still then and the grown-up and kid and me LOVED The Looney Tunes.

And the grown-up in me loves Space Jam. A nostalgic film that decidedly mixed two of the most random things together, basketball and Looney Tunes. As random as it was, it worked hilariously, especially with the help of basketball star Michael Jordan, who in this film you can tell why he didn’t break into acting much more.

His acting is horrible, but it’s okay, it only adds to the silliness of this film. Also if you can remember, Bill Murray is in this movie. Actually, he saves the day out of nowhere in the end and it is hysterical. The movie is funny, over-the-top and a classic in my book simply because I feel it’s a film that hasn’t been forgotten 18 years in the future, and I don’t think it’ll be forgotten any time soon.